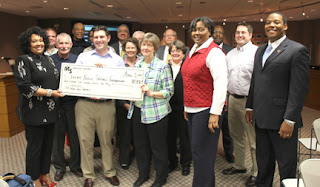 Angelo Balisteri of Major Saver, Inc. presented a check to the TPS Board of Education and Foundation on April 4, 2013.

Since its inception in 1986, the Foundation has made a difference in student learning contributing over $950,000 through its Educational Grant Program, annual Win Tidwell Golf Tournament, Fall Foundation Community Breakfast and overseeing scholarships awarded to TPS seniors.