An Eagle Has Landed at Eisenhower Middle School 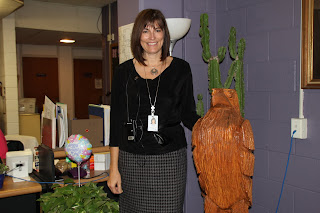 An eagle has landed at Eisenhower Middle School. It did not fly to the school, but instead was carried there in the back of a pickup. This eagle is made of yellow pine, stands several feet tall and was carved with a chainsaw by Pat Langton of Perry, Kansas. He says it took him four hours to cut, sand and stain the eagle.

It all began when Eisenhower Principal Rebecca Morrisey went to pick up an item at Langton’s business and notice a carved wooded eagle. She mentioned how she would like one of them for her school. Langston told her he would make one and donate it to the school.

On November 8, Langston and his wife delivered the eagle to Eisenhower. “It’s cool when somebody steps up and does that for a school, especially right now with money the way it is,” said Morrisey. She plans to put the eagle in a spot where it is very visible to the students.