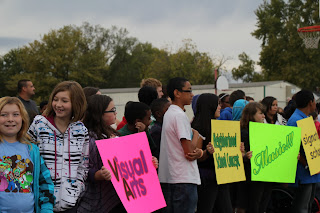 The two construction projects, totaling $11.5 million, will be among the largest in Topeka and Shawnee County this year. Local companies will do the work which will create 180 jobs. The projects are expected to be finished in time for the beginning of school in August 2012.

The signature schools will provide many opportunities for students that they have not had before. The signature for Ross-Eisenhower will be developed around music, including band, orchestra and vocal. Three new music rooms will be added at Ross along with 23 other classrooms.

“I think history will judge this historic commitment that will greatly benefit the students of Topeka Public Schools. From expanded opportunities for early childhood to signature schools that highlight music and the performing arts. Students will have opportunities they’ve never had before,” said Board of Education President Patrick Woods.
at October 17, 2011