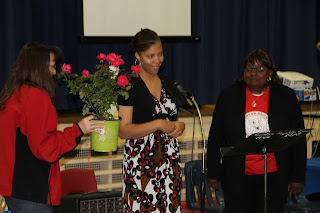 There were plenty of hugs, pictures and goodbyes said among students and staff at Quinton Heights and Linn Elementary Schools today. The two schools, along with Lundgren Elementary, are closing due to budget cuts.

Rainy weather forced school closing ceremonies to move inside at both schools. At Quinton Heights, Principal Dr. Jennifer Gordon was presented a rose plant and a picture of students in front of the school. The gesture brought tears to her eyes as she thanked the staff and students for a good year.

Dr. Gordon has been principal at Linn for five years and at Quinton Heights for two years. With both schools closing, she will become principal at Avondale East Elementary School.
at May 25, 2011