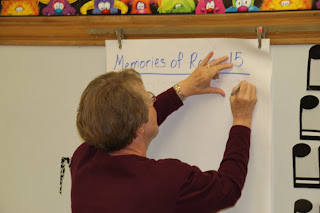 Several hundred people walked the halls of Lundgren Elementary School Sunday and talked about the memories they had of the school. Lundgren is one of three elementary schools closing this summer.

A number of former teachers and a former principal recalled their days at Lundgren which opened in 1949. Parents who attended Lundgren were also among those who visited their former classrooms. In each room was a large piece of paper where people could write their memories about the events that took place in the room. In the gymnasium tables were set up with books and pictures from the different decades of the schools.

With Lundgren closing, students who live in the area will attend State Street Elementary when school resumes in August.
at May 16, 2011